(In Praise of William Blake
despite the odd detractor.)

For he’s a jolly good fellow

and so say all of us

which Nobodaddy can deny.

Posted by Catherine Isolde Eisner at 13:27 No comments:

That Cry in the Night

That cry in the night

can be a train whistle,

flying inland in the evening –

the meaning is always the same;

and lets the cold wind in. 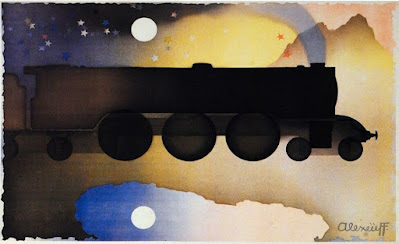 Posted by Catherine Isolde Eisner at 13:08 No comments:

Bullion Dross
Since Death these days is on everyone’s lips,
we pledge ourselves to His buyers’ market;
a mortal spark will trade a loss, perhaps,
for the spoils of everlasting darkness.

You’ll see that, like Samuel Palmer, I’ve stolen a snippet of John Milton for my own ends . . . indeed, when isolated, it’s a powerful oxymoron. Since my schooldays, aged fourteen, the bullion dross of Paradise Lost has never ceased to exemplify a crisp declamatory end-stopped line, hammered into the mind like a coffin nail.

Palmer’s image of spiritual loneliness – fear of abandonment by a deity – was inspired by Milton’s lines in Il Penseroso :

Or let my lamp at midnight hour,
Be seen in some high lonely tow’r,

Palmer’s comments on the dark night of the soul summoned up by The Lonely Tower may be read in this fragment, tentatively identifying the source of his etching :

Here poetic loneliness has been attempted; not the loneliness of a desert, but a secluded spot in a genial, pastoral country, enriched also by antique relics, such as those so-called ‘Druidic stones’. The constellation of the ‘Bear’ may help to explain that the building is the tower of Il Penseroso. Two shepherds, watching their flocks, speak together of the mysterious light above them.

However, we can never be certain that Palmer was not also conversant with Matthew Arnold’s own long dark night of the soul, Dover Beach (1867), when published a decade earlier. (Dover Beach, of course, was published less than a decade after Origin of Species, 1859.)

The Monuments of Art are easily outdone by Spirits reprobate.                             To my mind, spiritual doubt is graphically symbolised by the ‘druidic stones’ distant on a ‘darkling plain’ bathed in a ‘mysterious light’ whose witnesses are ‘shepherds abiding in the field, keeping watch over their flock by night.’

Challenged in their lifetime by post-Darwinism’s retreating ‘Sea of Faith’, both Palmer-the-mystic and Arnold-the-doubter in these figurations attempted through their art each an allegorical exegesis of their Victorian generation’s conflicts of doubt as Science warred with Church for supremacy in the race to have the last word on defining the human condition . . . predestined versus evolved by natural selection.

Both worshippers at the altar of Milton (author of Eikonoklastes), they saw the contradictions thrown up by the Spirit of the Age resolved, I believe, by Milton’s own astonishing iconoclasm in characterising the sardonic Arch Fiend as altogether more appealing than the Great Architect.

For Milton to challenge his faith by daring to banish Jove’s ‘Architect’ from Paradise – the fallen angel who had ‘built in Heaven high Towers’ – then send him ‘headlong’ to the mines of the Underworld to the dig out ‘ribs of gold’ and, with ‘his industrious crew’, to cast in foundries the ‘massy Ore’, scum the ‘bullion dross’, and thence to ‘build in Hell’ a palace of ‘fretted Gold’, as a tribute to the Great Adversary to outrival the Kingdom of the Creator, was beyond audacious.

For those of us whose creed is no more and no less than belief in the unbearable reality of being, which existentialists call enargeia, the contrarian impulse to ‘make a Heaven of Hell, a Hell of Heaven’ is a casuistic paradox that, notwithstanding, endorses that more modest thing, the audacity of Art.

That space the Evil One abstracted . . .
https://catherineeisnerfrance.blogspot.com/2018/05/that-space-evil-one-abstracted-and.html

and
Ignoble Retreat at the Edge where Earth and Firmament meet . . . https://catherineeisnerfrance.blogspot.com/2020/02/ignoble-retreat-at-edge-where-earth-and.html

Catherine Eisner believes passionately in plot-driven suspense fiction, a devotion to literary craft that draws on studies in psychoanalytical criminology and psychoactive pharmacology to explore the dark side of motivation, and ignite plot twists with unexpected outcomes. Within these disciplines Eisner’s fictions seek to explore variant literary forms derived from psychotherapy and criminology to trace the traumas of characters in extremis. Compulsive recurring sub-themes in her narratives examine sibling rivalry, rivalrous cousinhood, pathological imposture, financial chicanery, and the effects of non-familial male pheromones on pubescence,
see Eisner’s Sister Morphine (2008)
http://catherineeisnerfrance.blogspot.co.uk/2011/09/sister-morphine.html
and Listen Close to Me (2011)
http://catherineeisnerfrance.blogspot.co.uk/2011/09/published-this-autumn-listen-close-to.html
and A Bad Case (2014)
http://catherineeisnerfrance.blogspot.co.uk/2015/07/a-bad-case-and-other-adventures-of.html

Posted by Catherine Isolde Eisner at 04:12 No comments:

Capital Murder: Emily Dickinson and the Case of the Missing Metonyms

I refer to the notorious forgery of an Emily Dickinson poem fabricated by the homicidal fraudster and Mormon iconoclast, Mark Hofmann, whose inspired fakery – conceived to dupe academia – first surfaced in a catalogue of Fine Books and Manuscripts mailed to collectors by a major international auction house in 1997. Reportedly, the manuscript was sold for $21,000.

While commending the ‘reverse-engineered’ invention of a fellow fictionist, I find, however, I am compelled to take issue with at least three shortcomings in Hoffman’s criminal act of poetic personation. Since I am well-known as a fixated completist, I trust you’ll understand why these deficiencies in Hofmann’s attempts to replicate a venerated canonical style continue to rankle with me.
But first the verses. Can you spot the howlers?
That God cannot be understood
Everyone agrees
We do not know His motives nor
Comprehend his Deeds –

Then why should I seek solace in
What I cannot know?
Better to play in winter’s sun
Than to fear the Snow.

Surely – everyone agrees – a defining characteristic of Dickinson’s verse is the metonymic capitalisation of her motifs . . . they are the signature feature of her rhetorical devices.

Blooper 1: Where’s the capitalised ‘H’ for His deeds? ‘Reverential capitalisation’ is a scriptural convention no devout 19th Century versifier would be without.

Blooper 2: As to the familiar capitalised Dickinsonian metonyms, where is the consistency that would balance the figuration of Life and Death as Sun and Snow?

Blooper 3: Conversely, it’s evident to me that Hofmann was naïvely overeager in his assumption that line-breaks in Emily’s manuscripts necessarily indicate capitalisation of the next line . (You can see in the example of her true hand, Left, the constraint of her notepaper width does NOT determine the capitalisation of her verses: Though the great Waters sleep, / That they are still the Deep, / We cannot doubt —)

I suspect that Emily lived through a period of reappraisal as to personified nouns. I have always considered it curious that the four seasons in our language remain uncapitalised. Surely spring, when personified, takes a capital? And is feminine? (Emily sees Grass as Nature deserving of a feminine possessive determiner and pronoun . . . the Wind is a capitalised male, a metonym for God: The Wind does not require the Grass / To answer—Wherefore when He pass / She cannot keep Her place.)

By the late 19th Century, discriminatory capitalisation was a subject of fickle debate. As a certain flippant connoisseur pronounced in 1896, ‘Many are ready to talk of some crafts under the name of art, which must now be spelt with a capital letter – why it written with the capitalest of letters, I know no more than the artists.’

A criminal act of poetic personation.

With hindsight, it’s glib to claim special insights into this shabby affair of literary forgery BUT I do profoundly believe greater vigilance could have been observed on the purely textual details I’ve identified.

Yes, the forger’s writing-paper was manufactured in Boston most probably in 1871, when Emily was in her forties.

Yes, the forger’s script replicated the hand of a poetess no longer cursive in her febrile latter years whose decline saw each character printed separately like that of a child. Nevertheless, there is a crudity in the hesitant execution that betrays the faker’s ineptitude.  (As an apparent holograph – especially the stumbled signing of her given name – the whole thing seems insincere.)

That my immersion in Dickinsonian speculations began many, many years ago is manifest in my writing of A Room to the End of Fall (composed in my late 20s and finally published in A Bad Case, 2014, by Salt). I quote an extract to demonstrate how period diction – as Hofmann’s pastiche exemplifies – can add colour and tone to sustain a momentary verisimilitude . . . momentary, that is, until the Deconstructionists start tearing it apart.

Here is an extract from the fictional Theresa Ollivante’s fictional novel, An Auroral Stain. . .

An Auroral Stain was conceived as a postbellum detective story and built on the fictitious premise of a private investigation by a housebound Emily Dickinson intent to solve the mystery of a serving-woman’s suspicious death, ably assisted by Maggie, her faithful Irish maid; my central conceit has the young colleen and her phobic mistress sleuthing as a sort of composite Massachusite Nancy Drew.
In those early months, I wrote most of the core passages of An Auroral Stain.
Was it the muffled chiming of the bells from those Irishtown churches on each street corner or the sheer drudgery of my austere day-to-day routines that I found conducive to the mapping of the febrile psyche of the Belle of Amherst and the quaint notions of her resourceful Irish maid?
Sometimes I would hear the faint strains of a fiddle diddlydeeing and it was as if the once-hidden roots of a deep-set tree were exposed raw above ground.
Anyhow, the brogue of those Irishtown denizens must have still been ringing in my ears when I wrote:

In my notes to my novel I encoded “Emily” as “Em Dash,” both on account of her mercurial nature and of her all-pervasive typographical separatrices that signal the places where you should catch your breath before resuming her spare end-stopped verses.

Hanged by a comma.

Posted by Catherine Isolde Eisner at 05:00 No comments: